In 1830, after a number of explosions at the DuPont powder mills on the Brandywine had left numerous children as orphans, or with only one parent, the Daughters of Charity arrived in Wilmington and set up St. Peter’s Orphanage for Girls at Third and West Streets in Wilmington’s Quaker Hill neighborhood. Over time, its location and name would change – eventually moving in 1939 onto an old estate near the north Wilmington town of Bellefonte and becoming known as Seton Villa.

In 1874, when the new Diocese of Wilmington was just five years old, Bishop Thomas Becker arranged for the Dominican sisters to staff the St. Paul’s Male Orphanage at 320 Jackson Street in Wilmington, where the nuns also operated the diocese’s first parochial school. The orphanage would prove short-lived, lasting only two years. However, in 1879, the Franciscan Sisters of Glen Riddle, Pa., established the St. James Male Protectory at Lovering Avenue and DuPont Street in Wilmington. Within a few years, the orphanage would move to a 95-acre farm, called Reybold, near Delaware City, and would remain there until 1941. Two years later, the diocese would acquire the Bancroft Estate near the Delaware Art Museum, where it would operate Siena Hall, an orphanage and group home for boys for nearly 60 years.

Services to families began in 1868, when the first Society of St. Vincent de Paul was established at St. Peter’s Church. This movement ultimately contributed to the establishment of the Catholic Welfare Guild in 1931 by Bishop Edmond J. FitzMaurice. The Guild formalized a series of ministries that would assist needy Catholics of all ages. Bishop FitzMaurice charged the Guild to work with families, especially those requesting placement of their children in institutions, to provide institutional care and services for children, and to promote the growth of the St. Vincent de Paul Societies to provide assistance for needy families.

In its first years, during the depths of the Great Depression, the Catholic Welfare Guild struggled to find its identity. The Guild’s first efforts included organizing chapters of the St. Vincent de Paul Society in the parishes and assisting pastors who did not have the resources to help all the families in their parishes who sought aid. The Guild also acquired fabric from the Red Cross, which parish volunteers would sew into clothing for needy families. During the first year of operation, the Catholic Welfare Guild succeeded in keeping a large number of children out of institutions by providing supportive services to their families. The Guild began providing a number of child-care services, arranging to have children watched in their own homes, or having them placed in a boarding home. It also took over responsibility for placing children in the two orphanages. By 1935, the needs of children were deemed so great that the Guild scaled back its other activities to concentrate on child placement.

In 1937, the Guild’s mission again broadened, as it opened its first thrift store at Fifth and Orange streets in Wilmington. The profits from the salvage and resale business financed an active foster care program that further reduced the numbers of children entering institutional care. Although no longer financing foster care, the Thrift Store is still in operation today as Catholic Charities Thrift Center, located at 23rd and Bowers Streets in northeast Wilmington, and a small center at Seton Center in Princess Anne, Maryland.

Other early services included teaching Catechism at institutions like Ferris School, Delaware State Hospital and the Women’s Prison, and providing for the burial of destitute Catholics who died in the care of the state or county governments.

From its earliest days, the Catholic Welfare Guild would focus on the family, and acted to keep families together. “The intimate family circle is the foundation on which our civilization rests, and the training ground of all social and moral virtues,” Bishop Fitzmaurice wrote in the 1933 annual report. “The Guild has spent all its energies to keep the family intact.”

That emphasis on stabilizing families would remain, even as changes in the larger society would affect the components of the diocese’s social services mission.

As the issues of poverty and civil rights drew the nation’s attention, Catholic Social Services, under the direction of Father (later Monsignor) Thomas J. Reese from 1957 to 1977, extended its reach to care for the victims of poverty and social injustice.

Two events occurred during the early part of this period that had significant impact on the organization’s future and growth. Catholic Social Services became a founding member of the United Way of Delaware. The agency also began to enter into contracts with the State of Delaware to receive some funding of child-care costs. At the same time, a lay Board of Directors began an increased prominence in Church leadership with the founding of the agency’s Advisory Board in 1959.

In the 1960’s, Catholic Social Services began providing family, individual, marital and pregnancy counseling, large-scale emergency financial assistance, aid to refugees, group home care and adoption services. The agency’s work became more sophisticated and specialized, as a team of professional counselors, psychologists and social workers was developed to respond to an ever-widening range of needs. As addictions to drugs and alcohol increased, the organization hired counselors trained to treat people with addictions.

For many years, the diocese’s social services programs focused heavily on Wilmington and New Castle County. In the 1960s, Catholic Social Services opened an office in Dover; offices in Georgetown and Salisbury, Md., followed.

By the mid-70s, both nationally and locally, there was intense study and a clearer focus given to the Catholic Charities mission. That mission, still guiding us today, has been articulated as a three-fold commitment to: 1) effective, high-quality, direct services to clients; 2) advocacy to humanize and transform the social order; and, 3) the empowerment of people by “convening” them around issues of importance and participation in a process of discernment and understanding.

It also embarked on a strategic planning process that resulted in a major reorganization and merger with other diocesan programs, and the adoption of the new name of Catholic Charities, as well as the Catholic Charities USA logo. Brought together in this merger were the Catholic Social Services programs and diocesan offices, which dealt with family life education, rural and migrant health services, parish social ministry coordination, peace and justice initiatives, and public policy formulation.

Building on that foundation over the following years, the organization received accreditation from the North American-wide Council on Accreditation of Services for Families and Children, expanded old programs, and added new ones.

This process of expansion, merger and reorganization led to a new headquarters site at 4th Street and Greenhill Avenue in Wilmington. Additions to Catholic Charities’ diverse services soon followed: the HIV/AIDS ministry, established in 1985; a unified parish social ministry, and a domestic violence program followed, both in the mid-1990s. The organization’s drug and alcohol treatment program, the Center for Pastoral Care, moved to the headquarters building from St. Joseph’s on the Brandywine Church in November of 1993.

Responding to the needs of the rural poor, and especially migrant farm workers, Franciscan Sisters established Casa San Francisco in an unpretentious home in Milton, Del., in 1981, and the Sisters of Charity opened the Seton Center in Princess Anne, Md., two years later. Concurrent with the name change to Catholic Charities in 1989, the Diocesan Department of Social Concerns was merged with the Catholic Charities. At that time, Casa San Francisco, Seton Center, and the Office of Parish Social Ministry became a part of Catholic Charities. The Parish Social Ministry program became a diocesan function in 2011.

In 1995, Children’s Home, Inc. in Claymont, DE came under the administration of Catholic Charities. This allowed Catholic Charities to broaden its continuum of services to children even further. However, group care for children gave way to home settings. Siena Hall was closed in 2003, and in 2010, Seton Villa, the last of the group homes, closed. Adoption services were closed in 2011.

Bayard House joined Catholic Charities on October 1, 2004. The transitional home for unwed mothers and their babies, formerly known as the Home of Divine Providence, was created in 1979 by community groups and individuals, with a common concern for the pregnancy problems of adolescent women. It received its State of Delaware license in 1982.

In 2009, Marydale Retirement Village, a rental community for extremely low-income seniors and persons with disabilities, joined the Catholic Charities family of services.

Catholic Charities became the statewide administrator of the Delaware Weatherization Assistance Service in July 2014. The program is a federally funded, free service that provides weatherization services designed to reduce energy costs for low-income families by improving the energy efficiency of their home.

For over 190 years, Catholic Charities has continued to grow, adding services and reaching further into the community. It is known throughout Delaware and Maryland’s Eastern Shore for its professionalism, its dedication, and, most of all, its loving care. Catholic Charities faces the uncertainties of the future knowing that two things are certain: that new needs will continue to appear, and that it will be ready to meet them.

1939: Diocese and Daughters of Charity acquire Coxe Estate on Bellevue Road and open orphanage for girls that becomes known as Seton Villa.

1943: Diocese acquires the Bancroft Estate on Kentmere Parkway and opens a residence for boys known as Siena Hall. A new facility is constructed in 1967.

1981: Casa San Francisco opens in Milton, Del., as a ministry to migrant workers.

1983: Daughters of Charity open Seton Center in Princess Anne, Md., as a ministry for rural and migrant workers.

1993: The Center for Pastoral Care, for alcohol and drug treatment, moves to Catholic Charities main office. 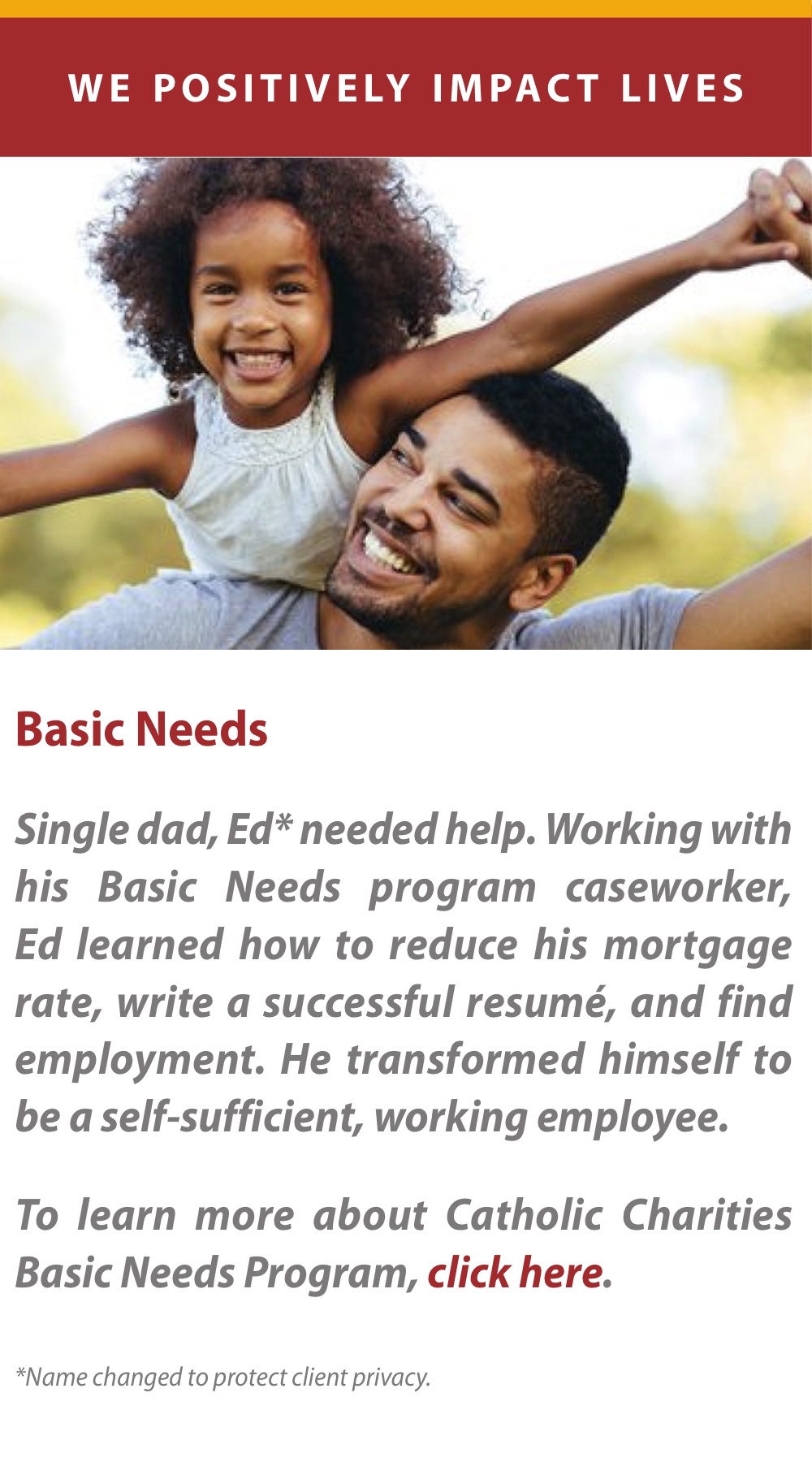